His most recent publications are Next Generation Transportation Impact Fees, Fiscal Impact Analysis: Methodologies for Planners, published by the American Planning Association, a chapter on fiscal impact analysis in the book Planning and Urban Design Standards, also published by the American Planning Association, and the ICMA IQ Report, Fiscal Impact Analysis: How Today’s Decisions Affect Tomorrow’s Budgets. Mr. Bise was also the principal author of the fiscal impact analysis component for the Atlanta Regional Commission’s Smart Growth Toolkit and is featured in the recently released AICP CD-ROM Training Package entitled The Economics of Density. Mr. Bise is currently on the Board of Directors of the Growth and Infrastructure Finance Consortium and recently Chaired the American Planning Association’s Paying for Growth Task Force. He was also recently named an Affiliate of the National Center for Smart Growth Research & Education. 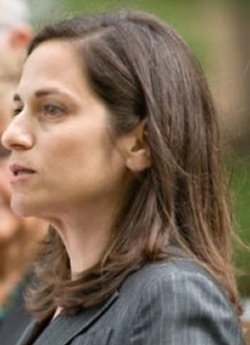 Julie Herlands is a Principal with TischlerBise and has fifteen years of planning, fiscal, and economic development experience. Prior to joining TischlerBise, Ms. Herlands worked in the public sector in Fairfax County, Virginia, for the Office of Community Revitalization and for the private sector for the International Economic Development Council (IEDC) in their Advisory Services and Research Department. She has led a number of consulting projects including economic and market feasibility analyses and economic development assessments and plans. Her economic and fiscal impact experience includes a wide-range of assignments in over fifteen states including growth scenarios, development projects, and incentive analysis. She has developed fiscal models for dozens of clients for local use to determine the fiscal impact of development projects.

She is a frequent presenter at national and regional conferences including serving as co-organizer and co-presenter at a half-day AICP Training Workshop entitled Fiscal Impact Assessment at the APA National Planning Conference. A session on impact fees and cash proffers presented at the APA National Conference is available through the APA training series, Best of Contemporary Community Planning. She recently co-chaired the APA Task Force on Economic Development is currently the Immediate Past Chair of the Economic Development Division of the APA.